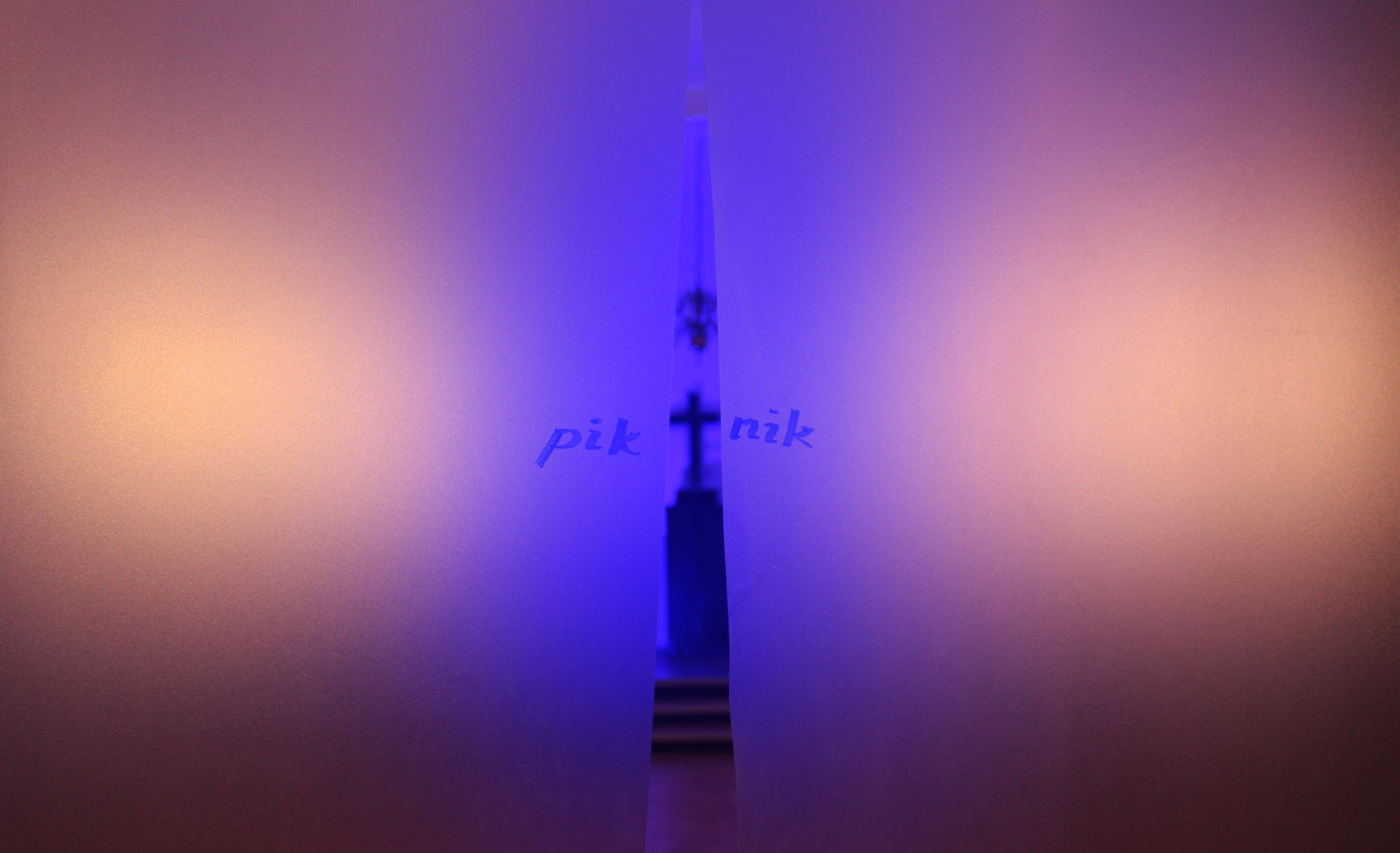 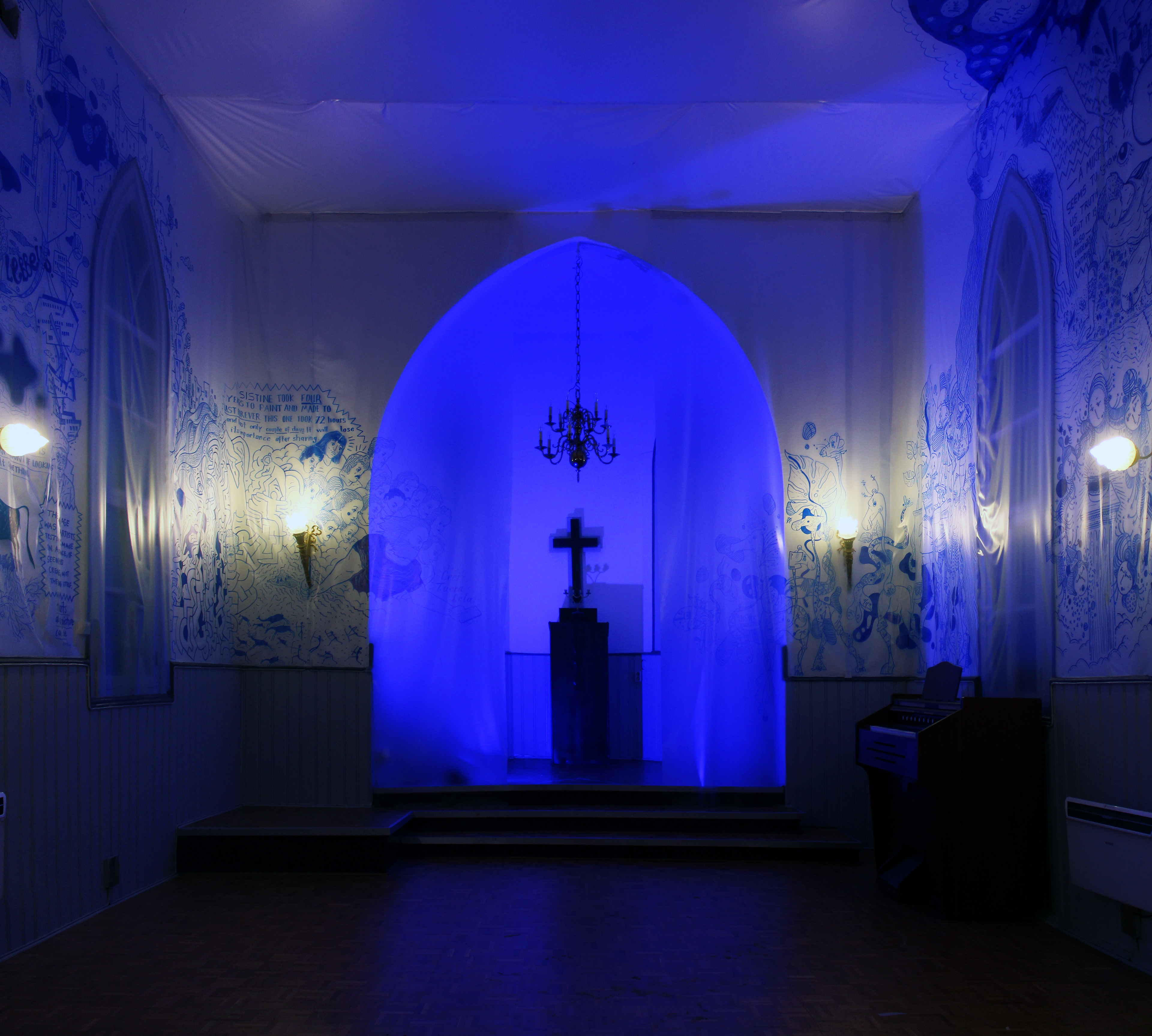 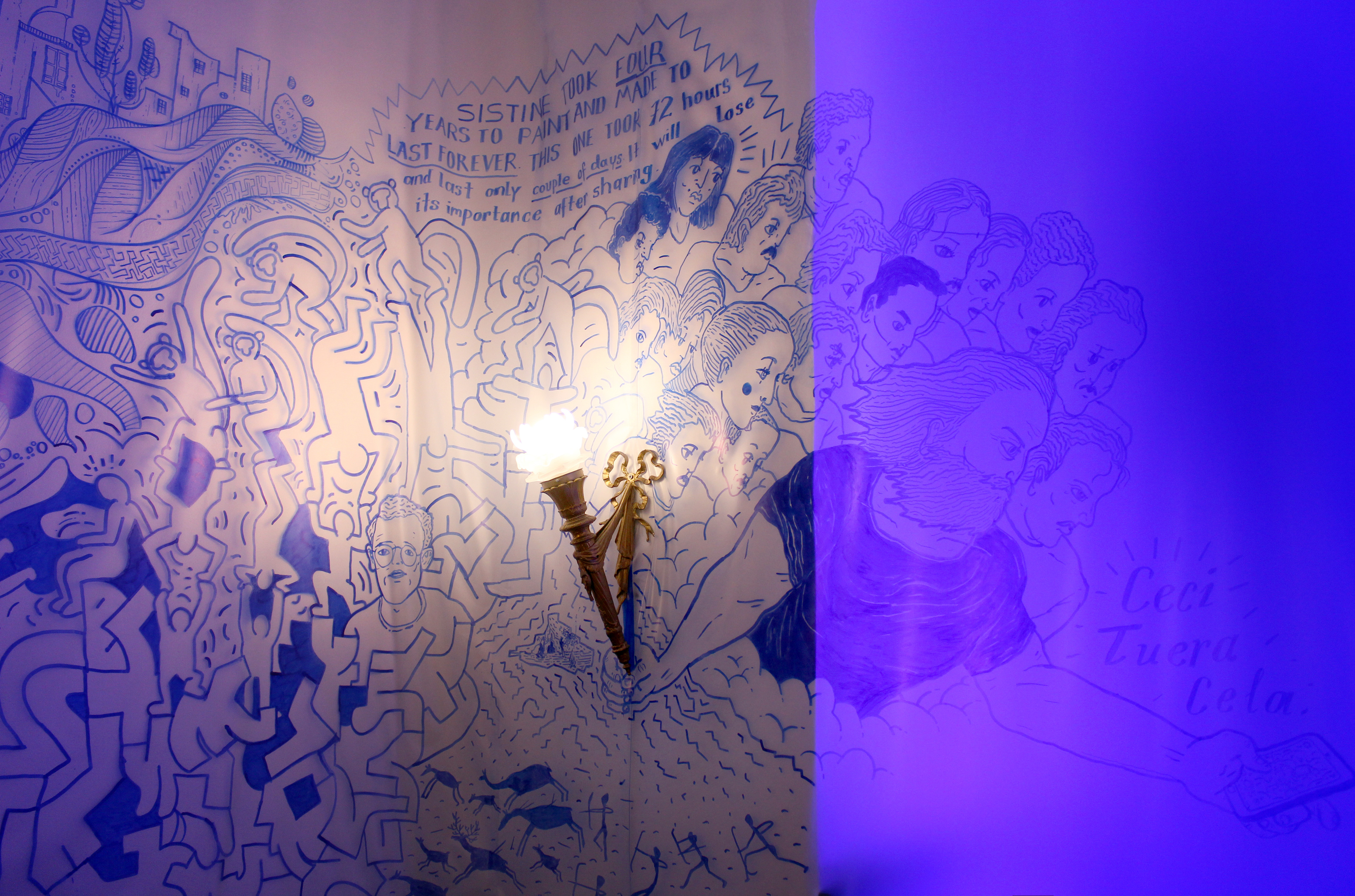 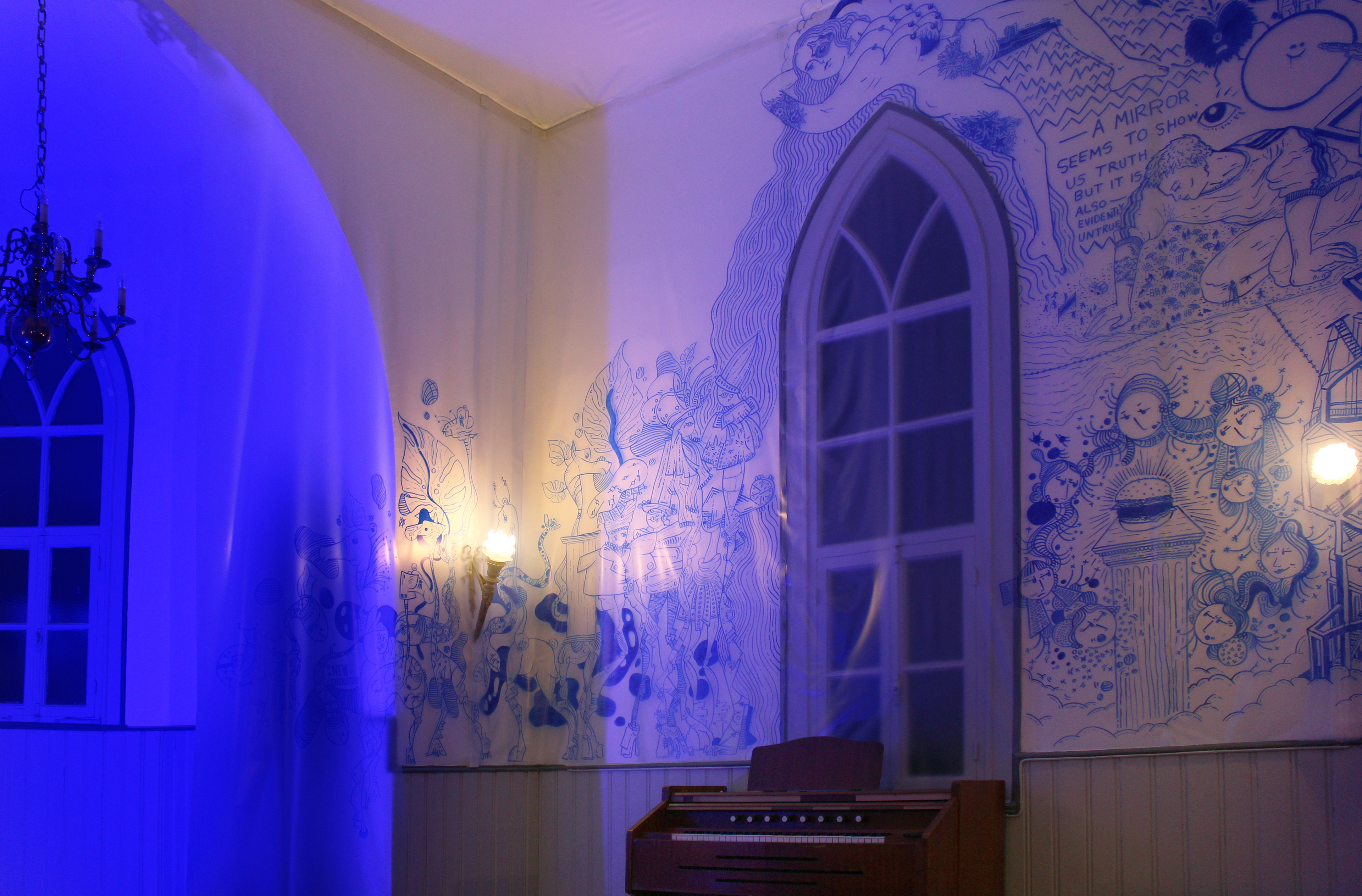 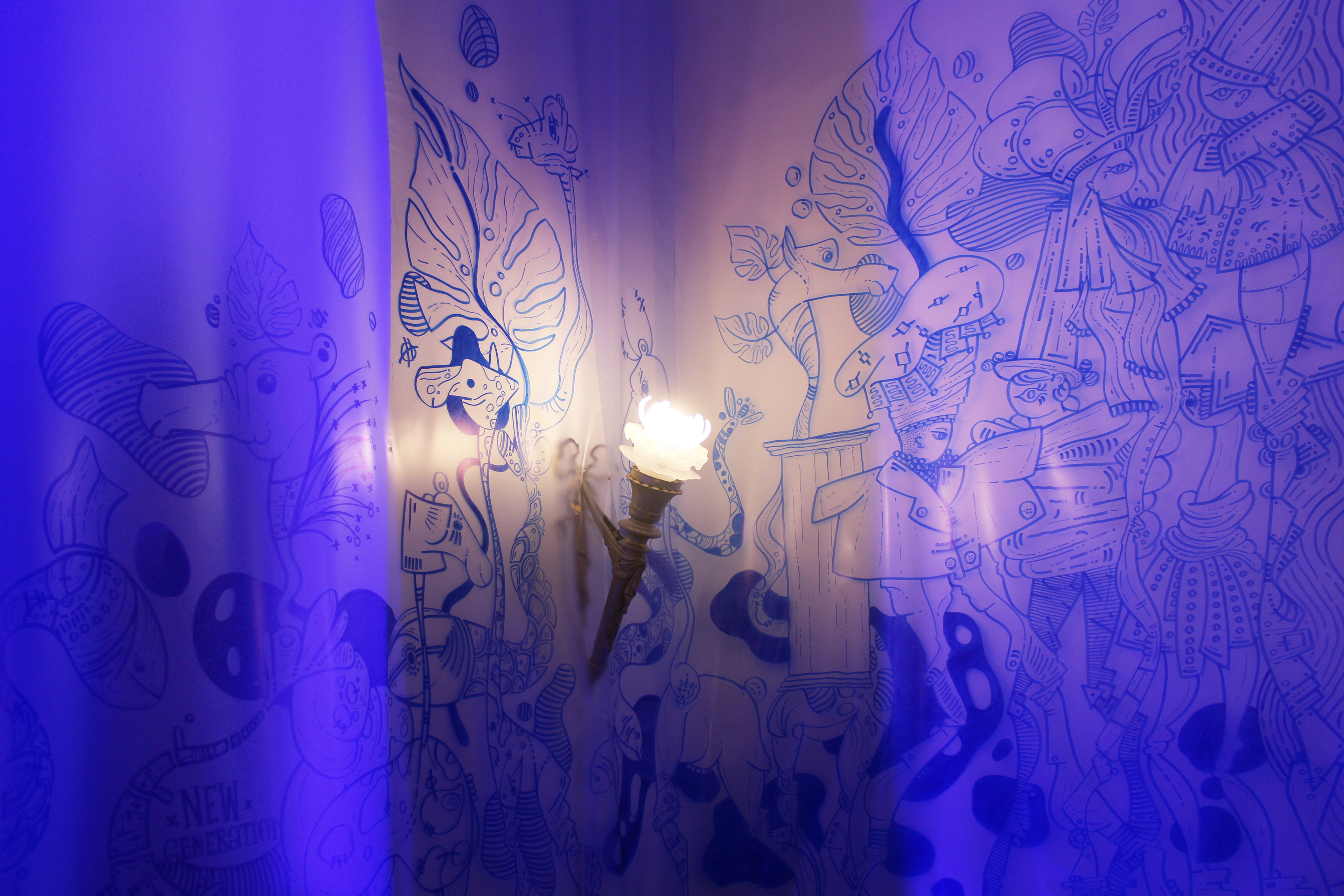 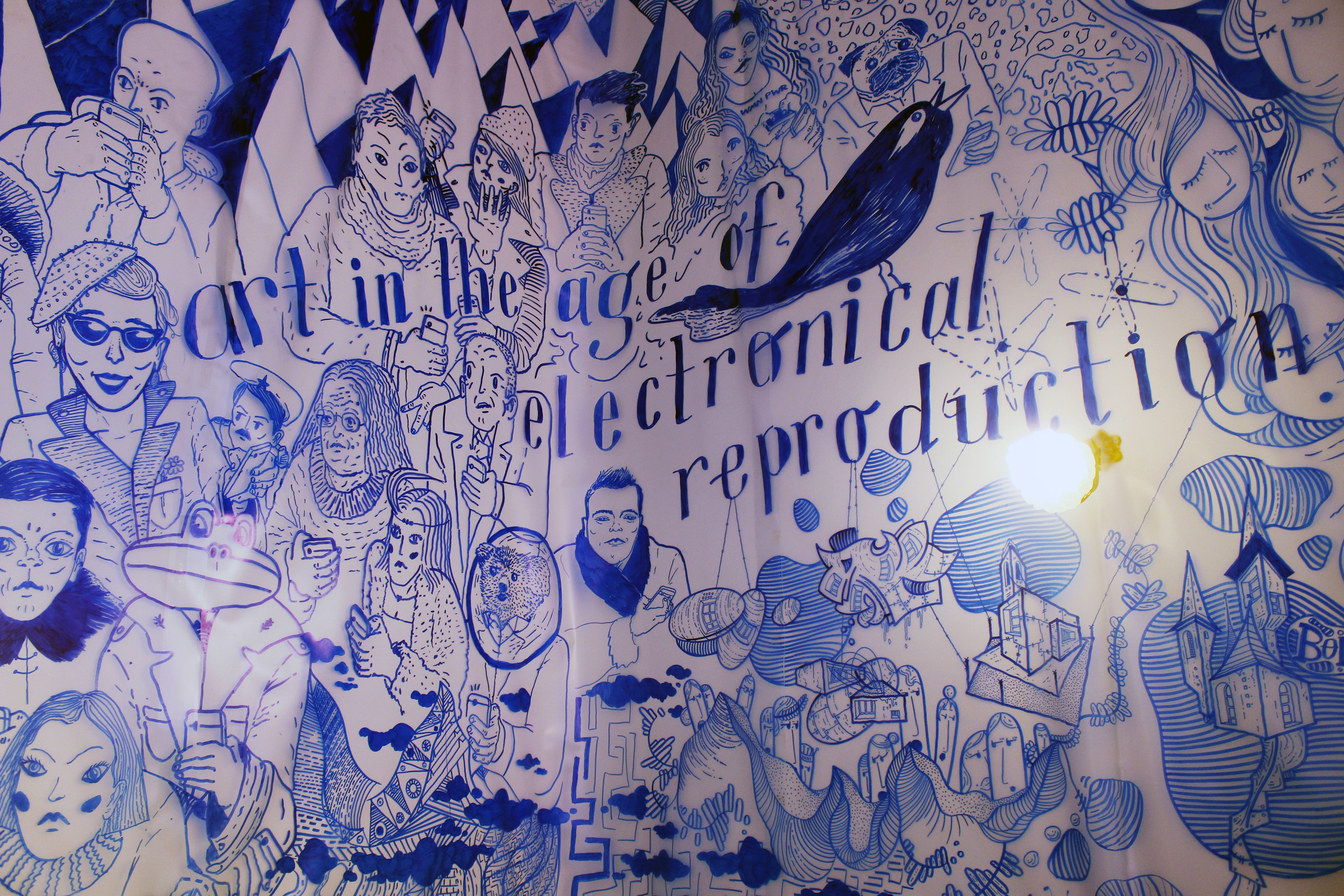 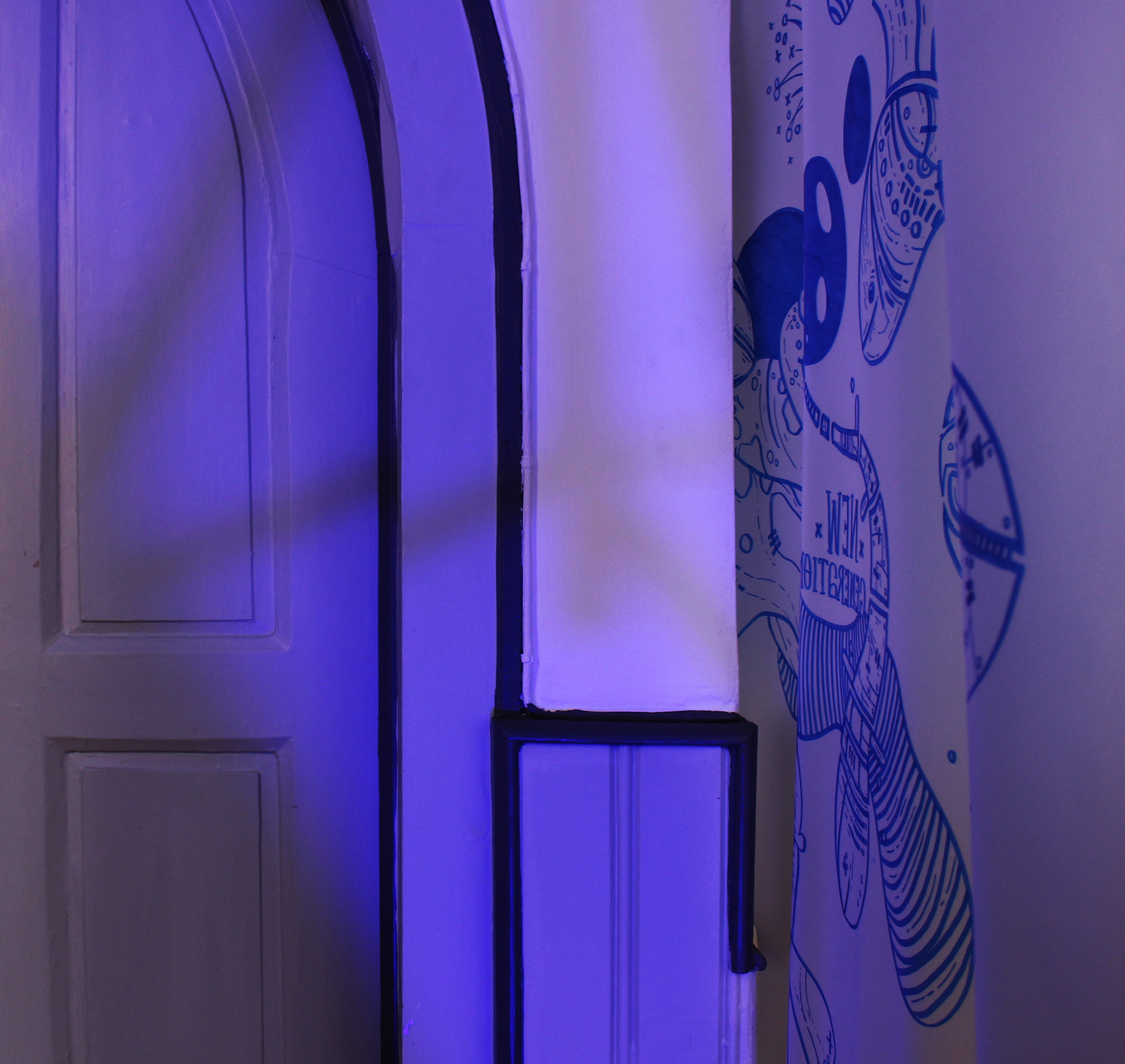 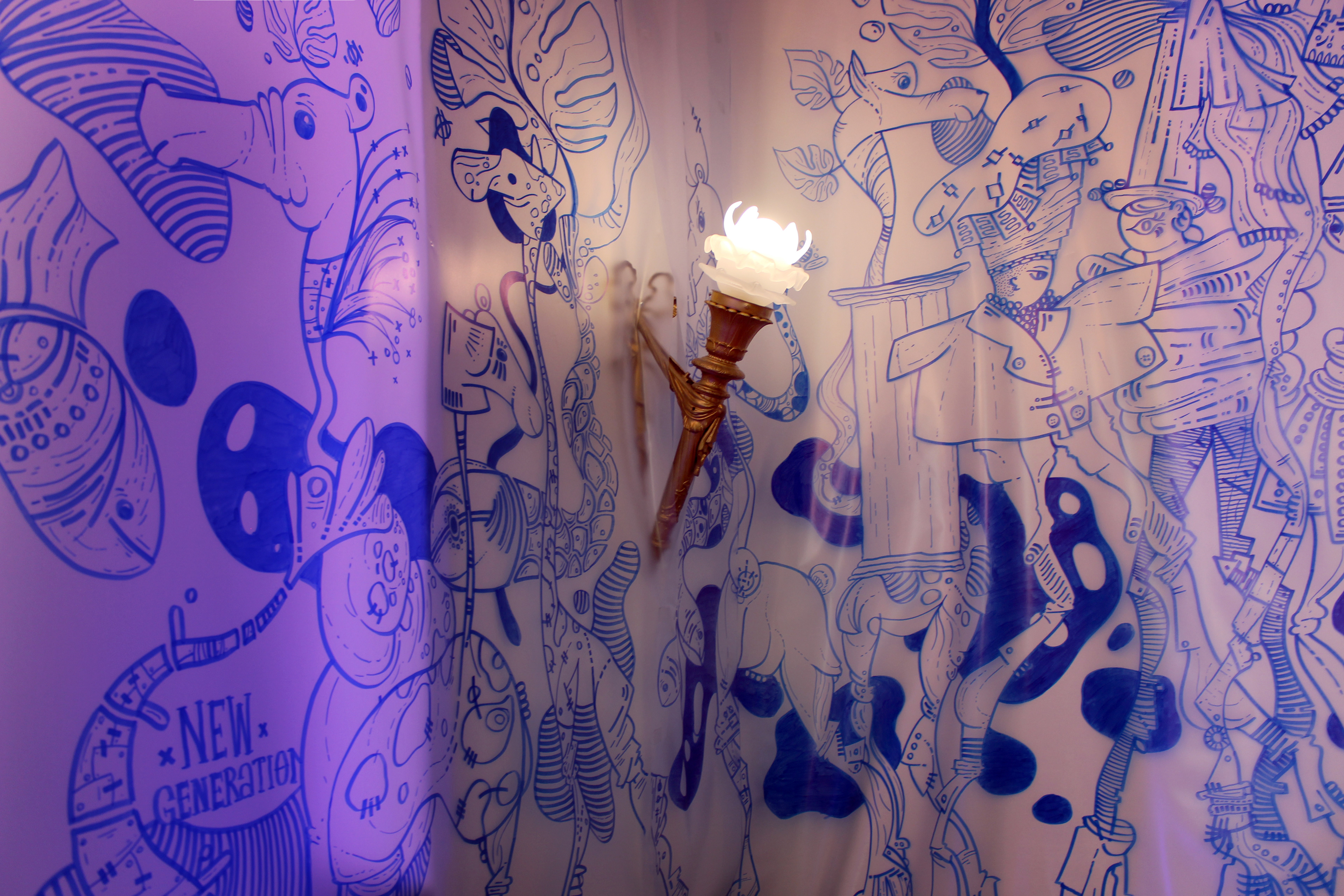 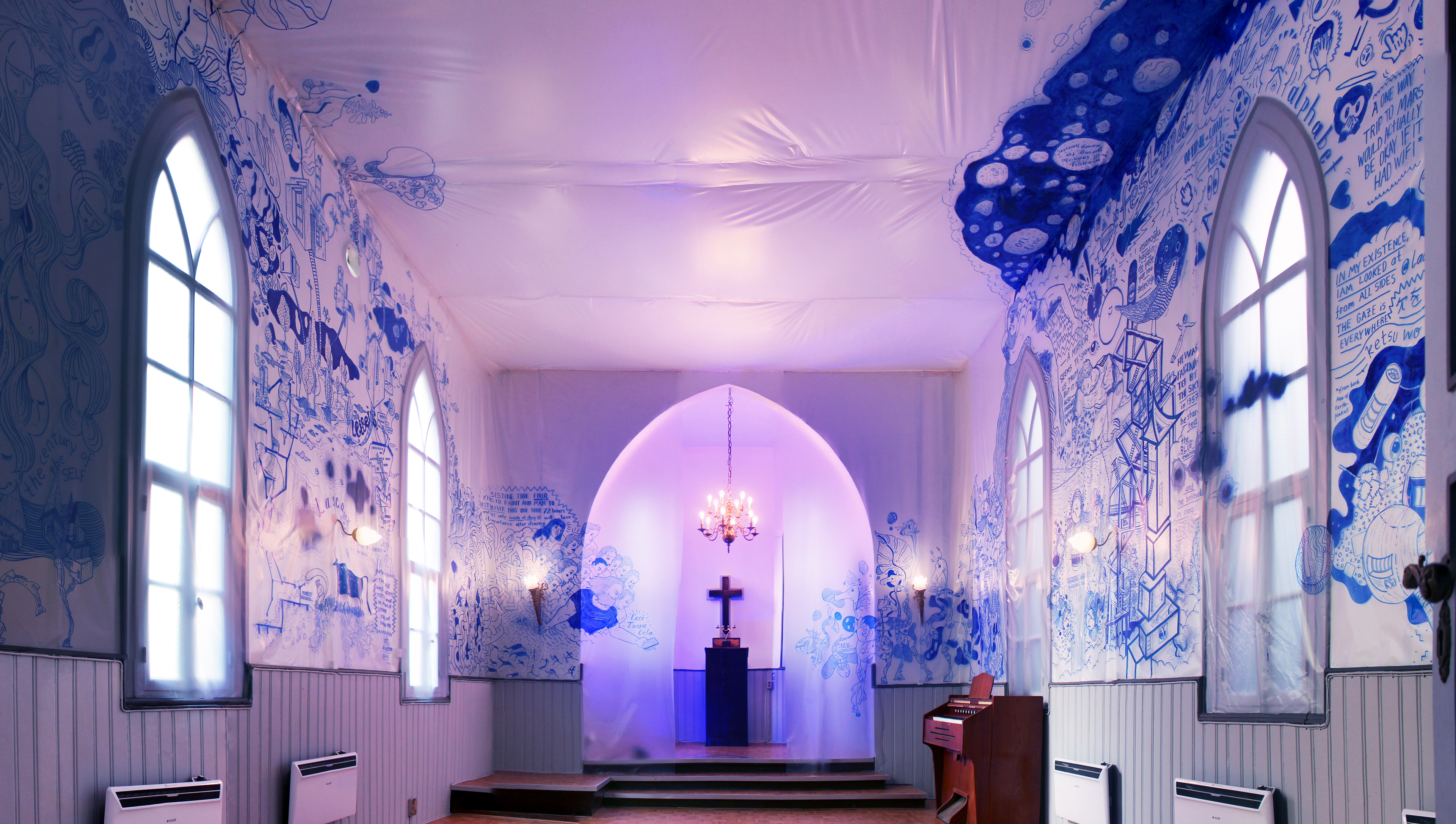 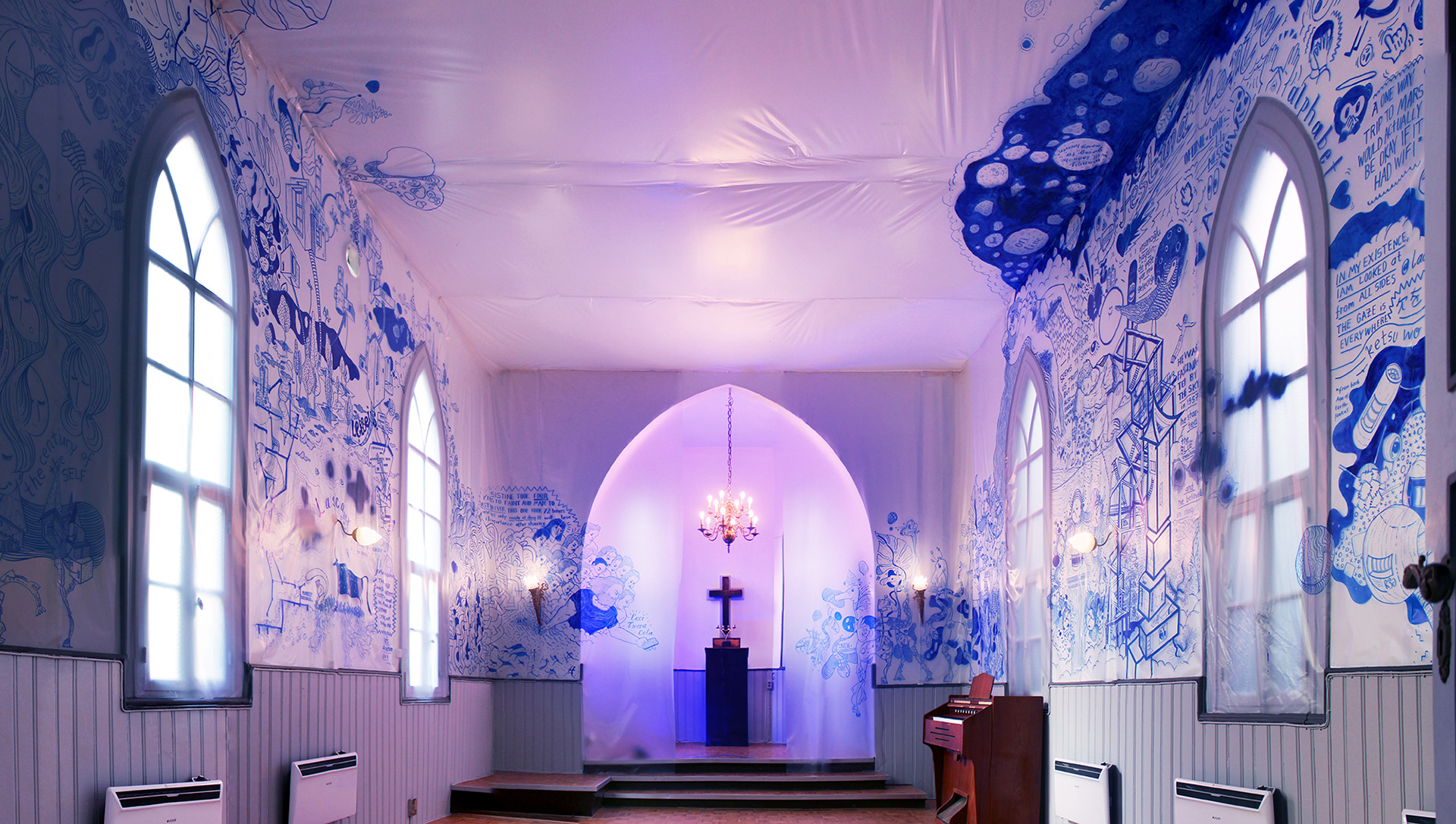 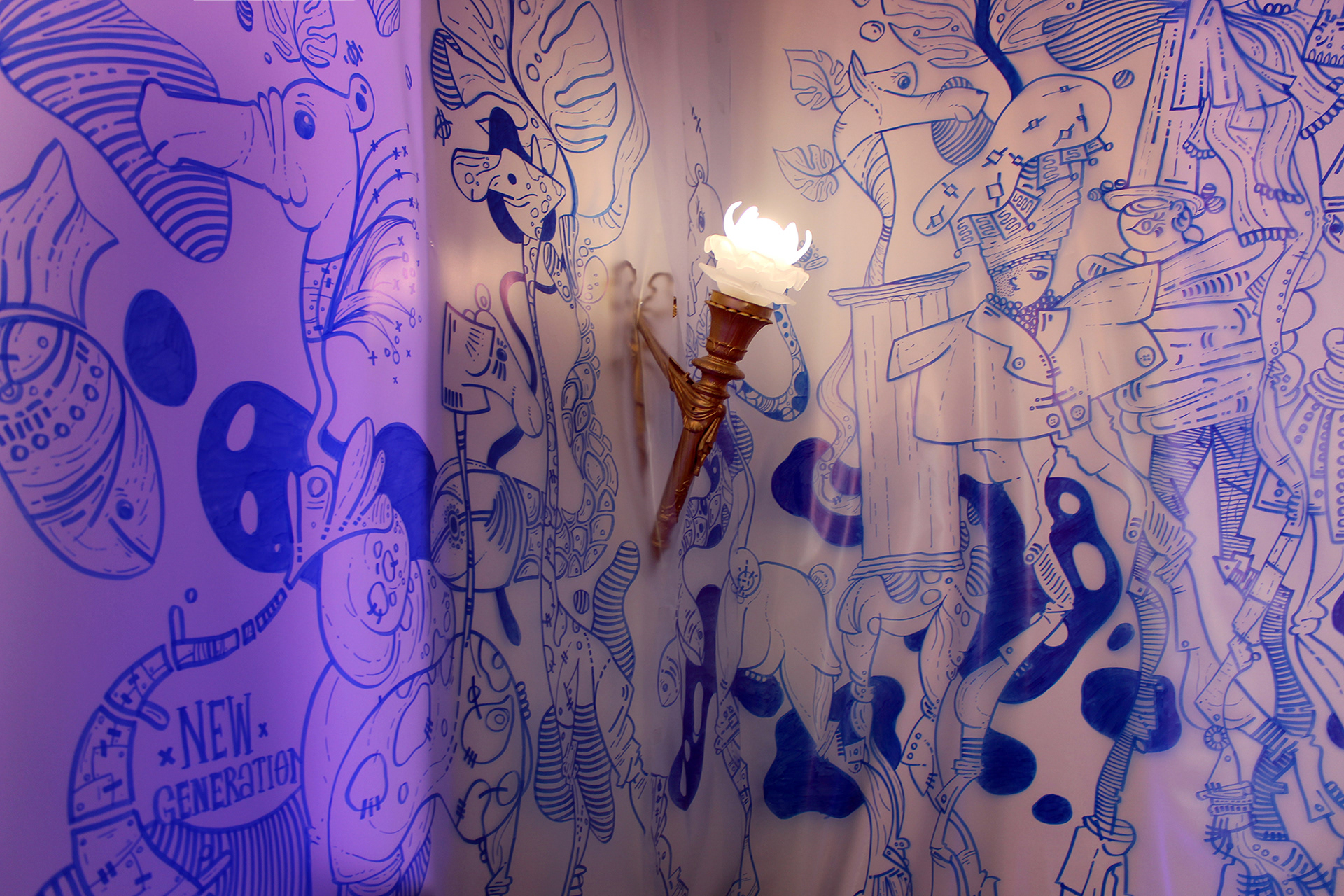 Artwork: Piknik
Production/Installation: Piknik, Melodi Dilan Gülbaba, Başak Tuna, Ömercan Çakır
Organization: Suzi Erşahin, Victoria Arzu Lejontåtel, Consulate General Of Sweden in Istanbul
Sponsor: Swedish Institute
As a contemporary practice constantly aiming to experiment between spatiality and drawing, Piknik Works did a performance of 72 hours non-stop drawing to play with boundaries of drawing, body and space. Located near the busy urban space of İstiklal Avenue, and ironically inside the Sweedish Consulate of İstanbul, a mysterious chapel housed the experiment. Artists lived inside this space for three days, doing nothing but drawing to transform all interior surfaces of the space. This pilgrimage adventure claims the action of drawing as a performative and activating element in order to intensify the creative process, carry it to the limits and to uncover tacit relationships between bodily and mental performance.
All the process is documented and constantly served to audience with live sharings in social media accounts of Piknik Works. For the duo, whose interests are focused on exploring relationship between drawing and space, this is the first enthusiastic step of an uncertain adventure. The second step of the project, which is supported by Sweedish Research Institute, is planned to be in Stockholm next summer.​​​​​​​
Content / Concept
Drawing directly into space as a storytelling practice is not something new to human. In fact it can be said that it is in our nature to paint on walls. In prehistoric times, humans reflected their observations on their daily life with drawings on the walls of the caves, where they lived, while hunting and gathering with the intention of continuing their life. Thanks to them, we know a bit of their story. This phenomenon can also be traced back to the paintings, drawings and patterns that reflect the culture and teachings on the walls and ceilings of the public and (mostly) religious structures in the history. As Performative Drawing is -ultimately- considered as a chapel painting process, Piknik strived to tell the story of our times, considering how our culture and everyday life changed with internet, social media, biotechnology and so on by painting and drawing on the walls with an improvisational manner. This narrative can also be read as a contemporary fresco, with many references and reinterpretations of the history of art and the precedents of spatial drawing practice.

Piknik chose to define this work as a performance, produced all the drawings in the space without any preparation, inspired by the reflections of the subjects they discussed, read and followed during the time they lived in the chapel. The work is also influenced by two books they brought to chapel; one being 'History of Pictures: From Cave to Computer Screen': a book on art history comprised of dialogues between David Hockney and Martin Gayford, the second being 'The Age of Earthquakes' by Hans Ulrich Obrist, Shuman Basar and David Coupland, commenting on the socio-cultural changes brought by technology. Social media has also been involved as an influential content. Some of the interactions in Piknik's instagram account were simultaneously reflected in the drawings and writings on the wall. Salutes and referrings to Lascaux Cave wall drawings, works of artists such as Michalengelo, Delaclorix, Caravaggio, Keith Harring, Rokkas vs Sukkas can be viewed throughout the entire space, as well as the drawings and quotes from today's culture and inspiration from social media sharings. The duo, working at the top of the scaffolds at the different ends of the space, sometimes side by side, sometimes in the space for three days, thinks that the emphasis on the performative process of this work is as important as the result.
With that perspective, it is very ironic that it took Michalengelo four years to paint Sistine, and it is made to last forever while Piknik's work took less than four days, it is painted on cheap plastic with boardmarkers, and it will lose its physical importance after all the sharings in the social media and internet. Piknik sees no better way to reflect on our contemporary culture than this ironic mise-en-scene.